The jobs on my to do list have been the same for a few weeks now and the monthly jobs tend to just roll over onto the next month making the lists even bigger… Time has been limited lately and as you all know the allotment has been put on the back burner whilst I’ve been working and spending time in Wales. I was however, lucky enough to have the afternoon off yesterday to spend up the allotment and I knew exactly what I wanted to get ticked off the list.

I stopped at our local Hardware store in the village on route to the allotment and picked up a couple of bags of compost so I could finally plant up the poor old Comfrey I had bought in Wales over 2 months ago. It’s now sitting pride of place in the back corner of the new area next to the tall sunflowers and future manure bin. I’m hoping to make some fertiliser with the leaves once the plant is established. 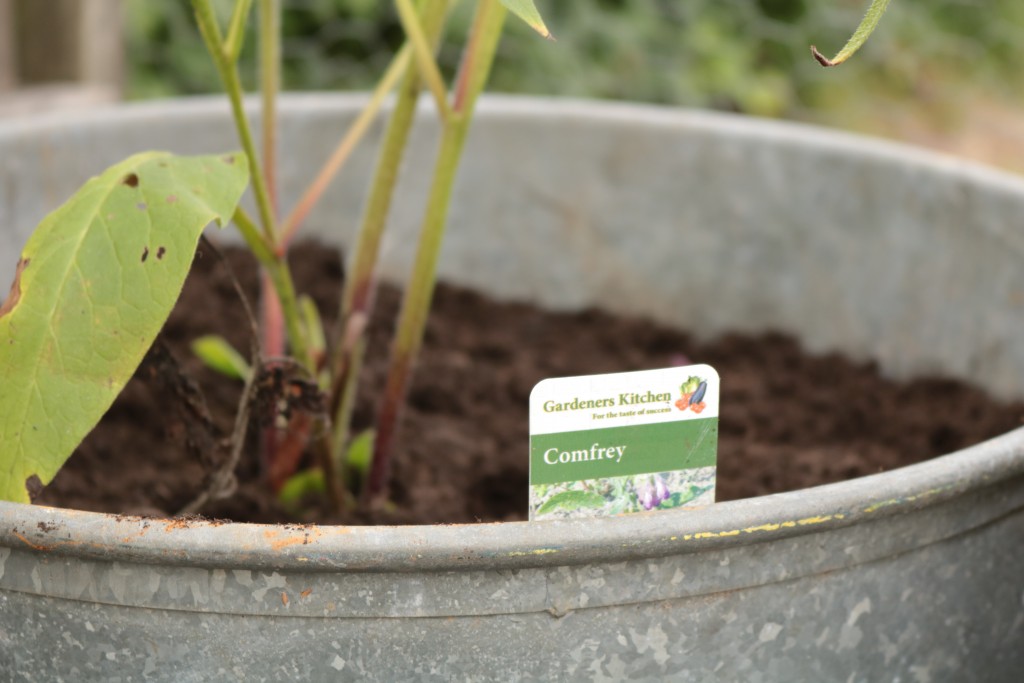 Next on the list was to dig up the old broad bean plants and to sow some dwarf french beans in that space. I always like to take advantage of the second growing year and although this could have been done 3 weeks ago I’m hoping that the little seeds will still provide me with a small harvest. The variety I’ve chosen is called ‘Amethyst’ and they are a stunning purple colour that turn green when they are cooked. I managed to fit in 3 rows after painfully digging the area, I haven’t done any digging in such a long time and I think my back is going to pay the price later on!

Whilst I was in the Legume bed I decided to do a bit of weeding around the courgettes, sweetcorn and carrots. That’s when I realised I hadn’t thinned the two rows of carrots out and they were jammed packed with seedlings! I spent a good 45 minutes pulling out some carrots to allow the others to have room to grow and ended up with a beautiful bunch of baby carrots to take home. I couldn’t have been happier with my little harvest of carrot thinnings and deep down I was glad to have left that job a little later in the year, now we’ve got some yummy baby carrots to have with our stir fry today and I can’t wait to eat them. I also managed to harvest a large handful of climbing french beans from the three sisters and a couple of courgettes, something I wouldn’t have noticed if I hadn’t been weeding them! 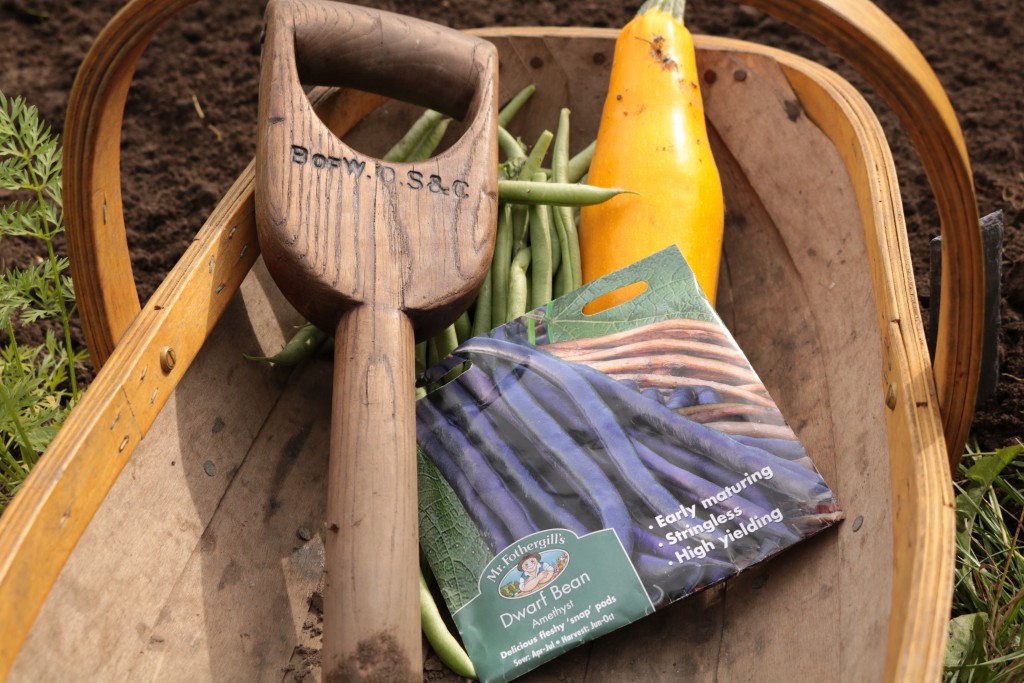 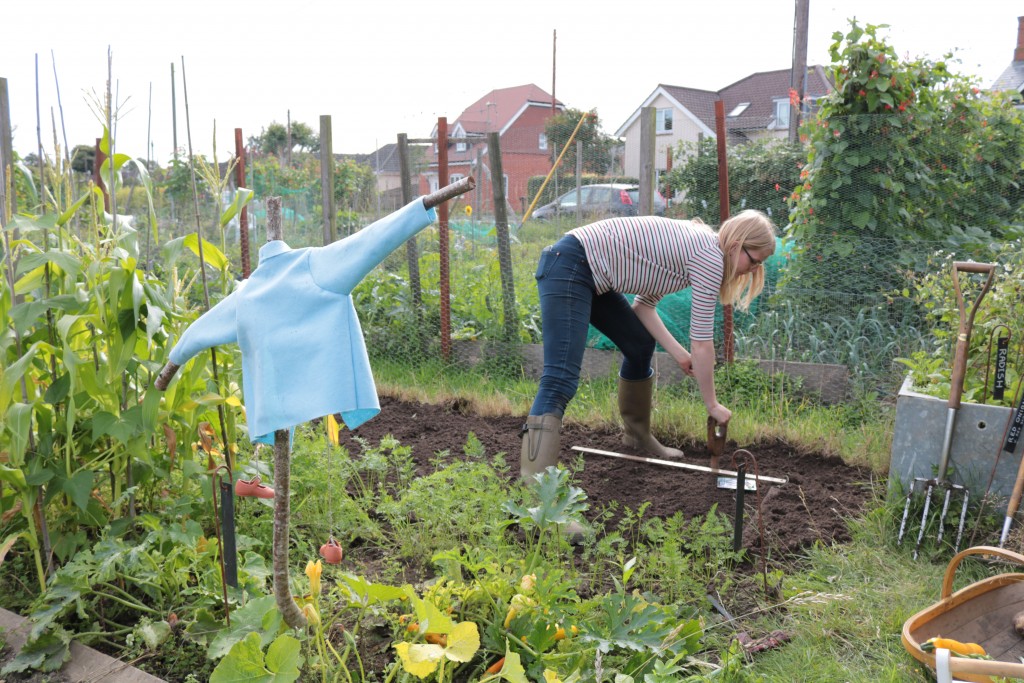 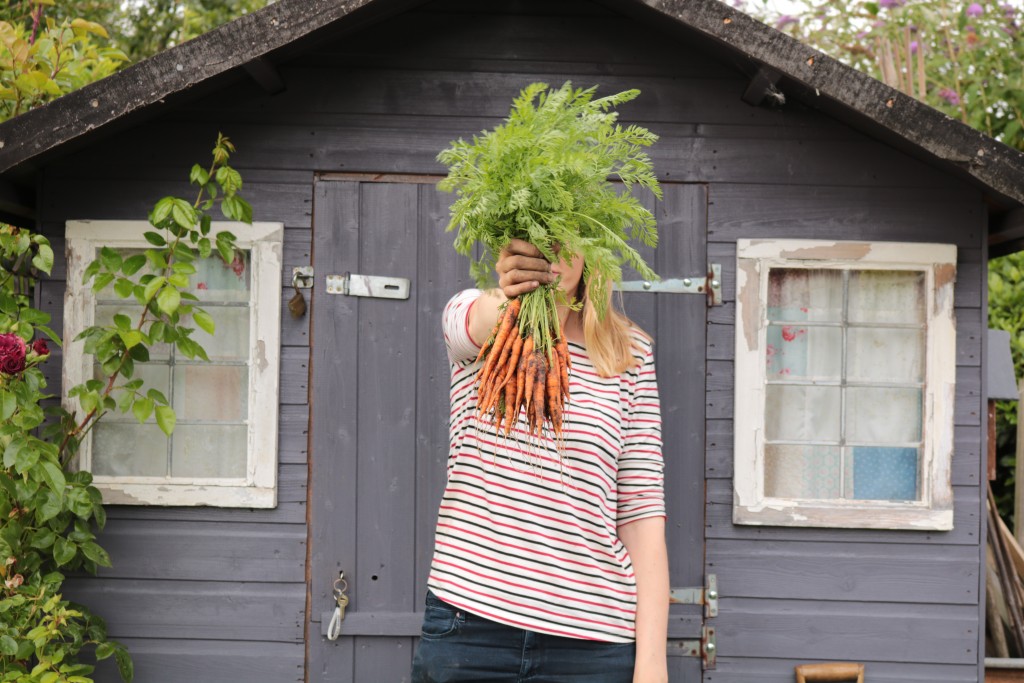 I’ve been harvesting the International Kidney potatoes for a while now and dug up the rest of row three this evening, they’ve been left in the ground rather long now so I can’t really call them salad potatoes anymore! None the less they’ll be delicious boiled up and served with mint and butter over the next few days. All this harvesting meant that a huge gap was available to grow something else in and I had just the two crops to plant here. I sowed some ‘Musselburgh’ leeks and ‘Rainbow’ swiss chard a month ago and they’ve been in the greenhouse waiting for the potatoes to be harvested so they could be planted out in that area. I planted out 3 rows of swiss chard and 2 rows of leeks, the last row of leeks will be planted once the last row of potatoes have been harvested which will hopefully be in the next week. I’ve grown both these crops this late in the Summer before and they’ve done brilliantly, they also over winter really well which is just perfect. 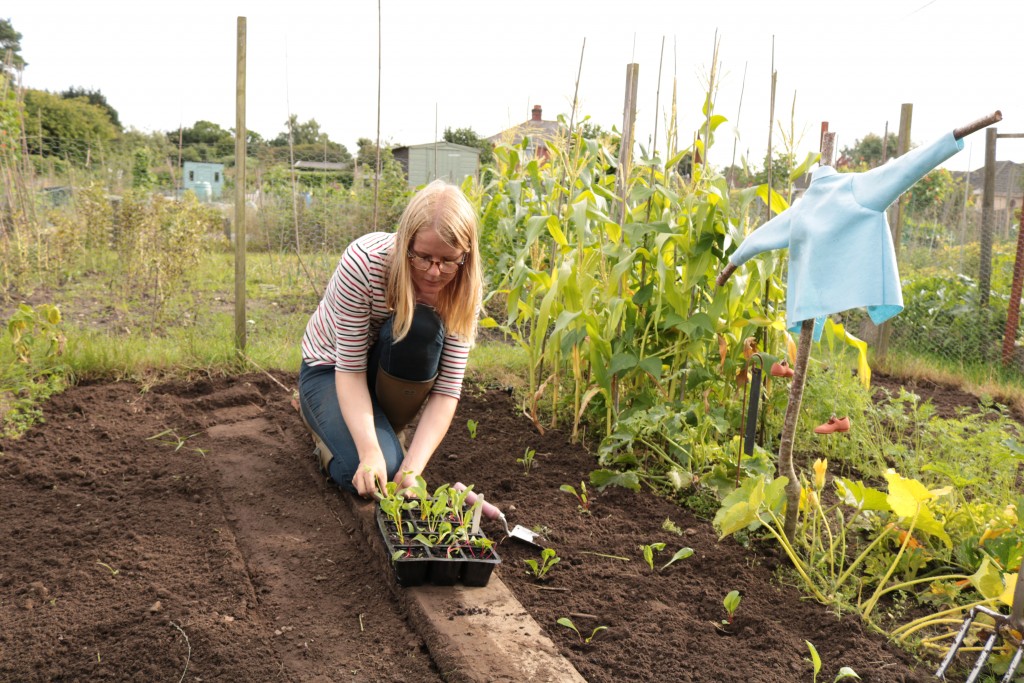 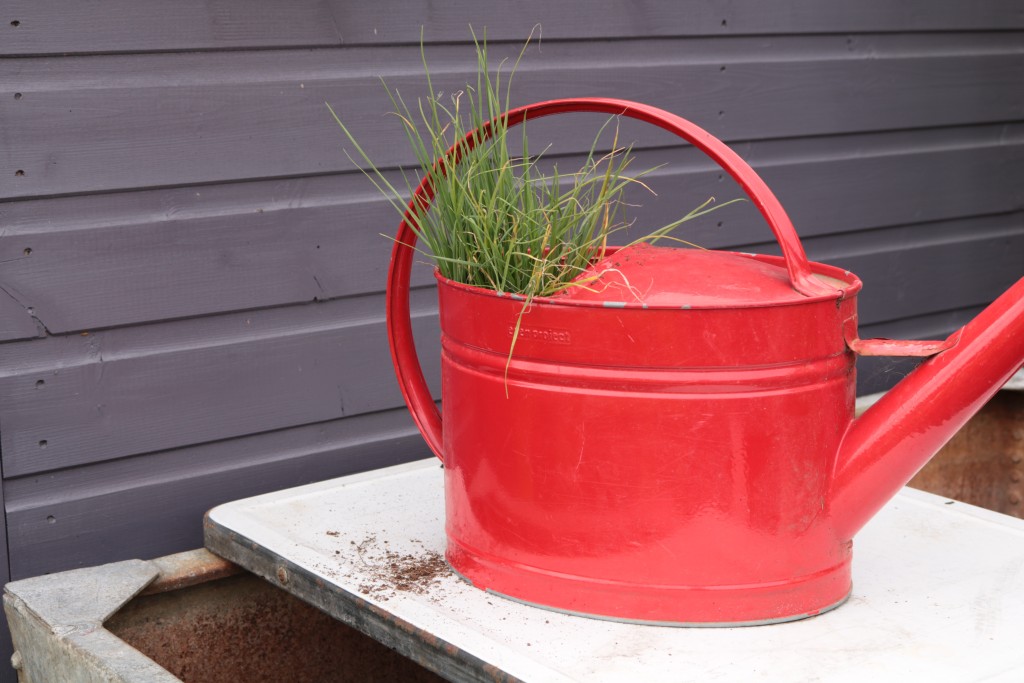 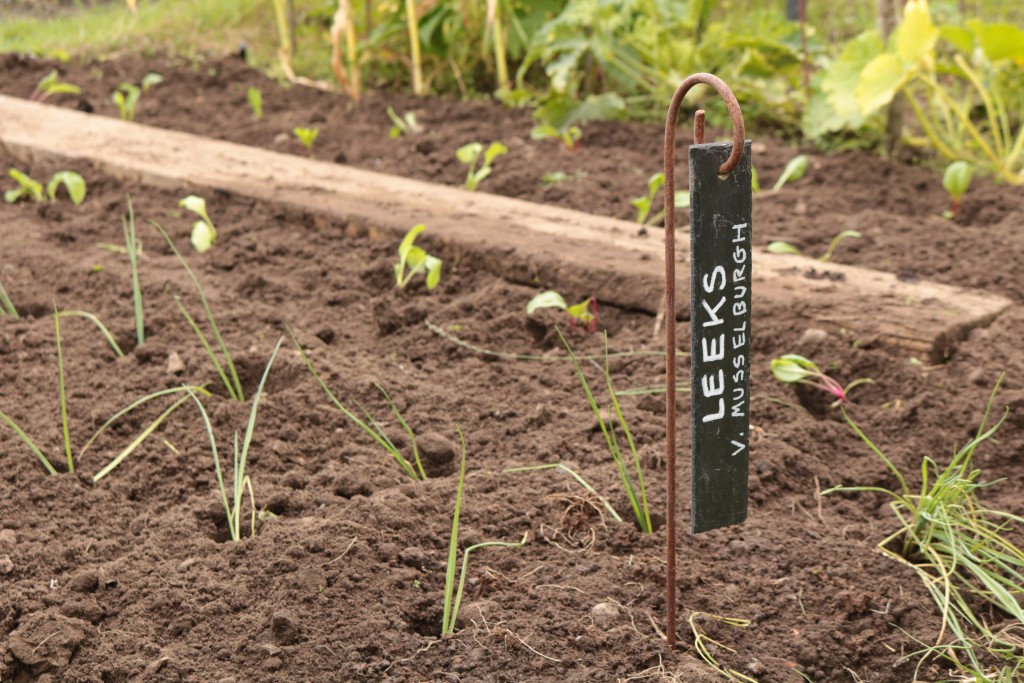 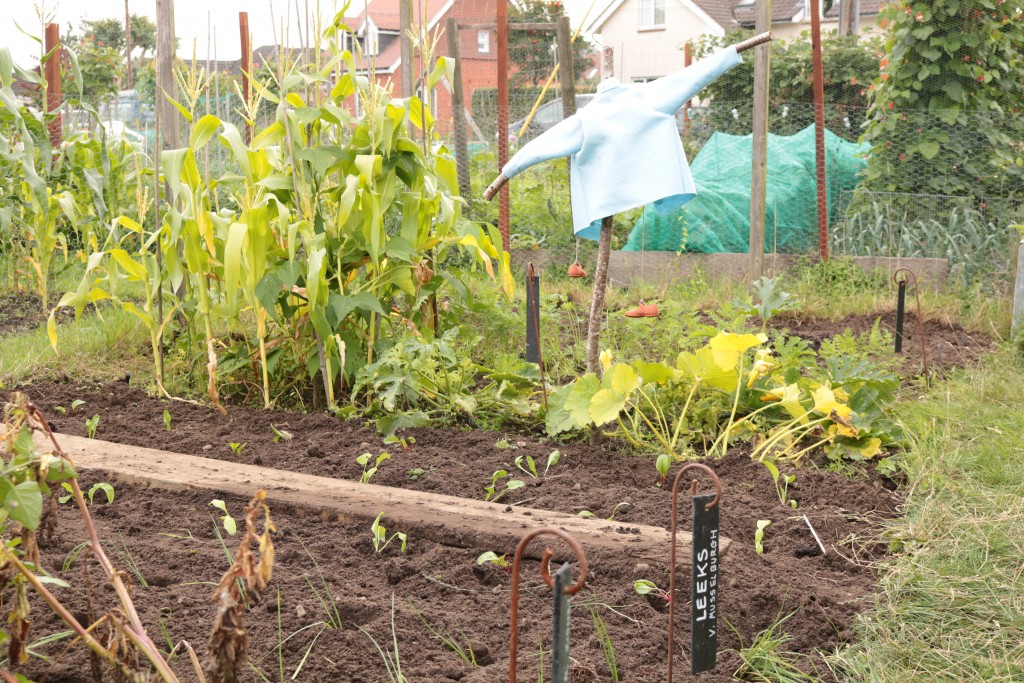 I spent a good 3 hours on the plot today and I had such a great time if not a tad busy (too busy for tea in fact!) There’s still plenty of jobs to do and I didn’t get round to planting out the pink ‘Little Lottie’ lavender plant that I purchased at Hampton Court today but hopefully it will go in at the weekend. I did however, manage to buy a galvanised ridge for my shed so I’m one step closer to getting that finished! My back is aching and my hands are dirty but as I walked home with my trug full of homegrown goodies I couldn’t stop smiling, you just can’t beat that feeling of growing and harvesting your own food, I wouldn’t change it for the world. 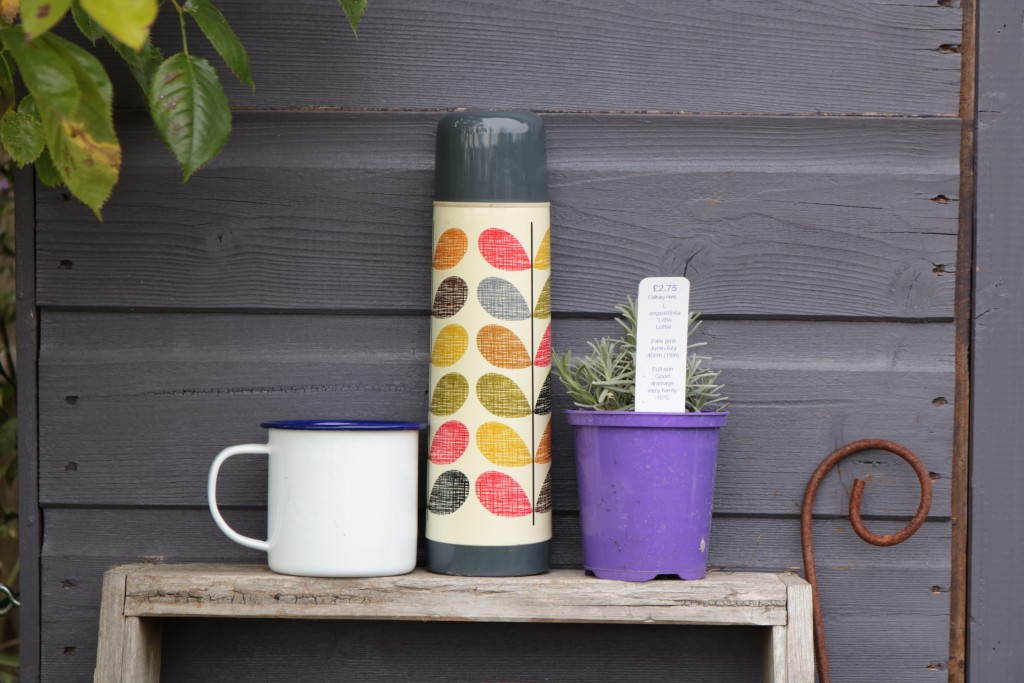 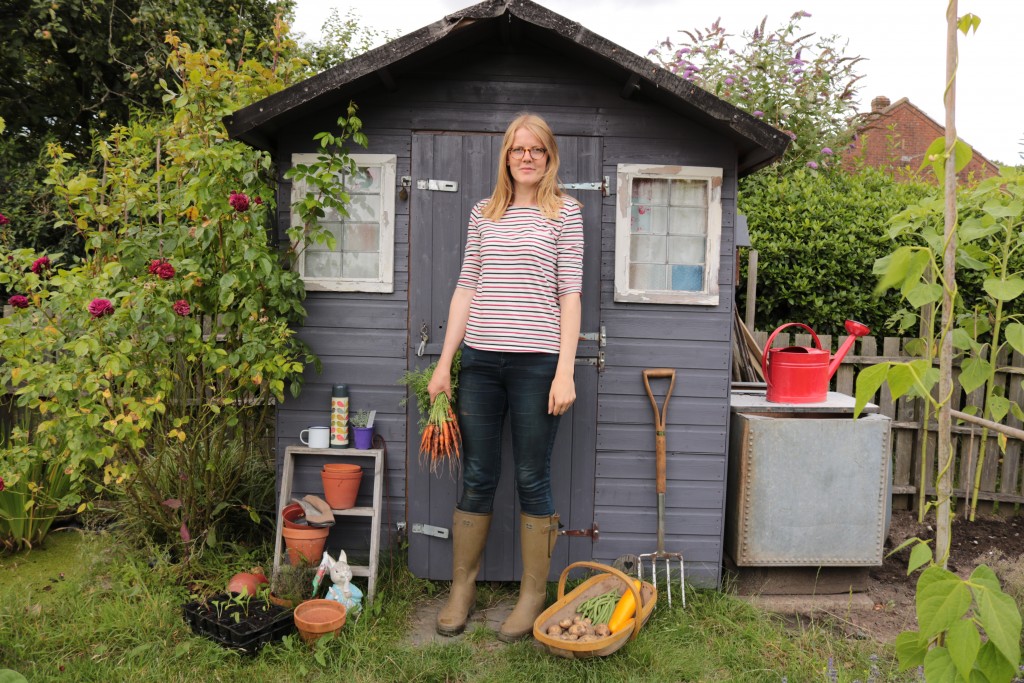 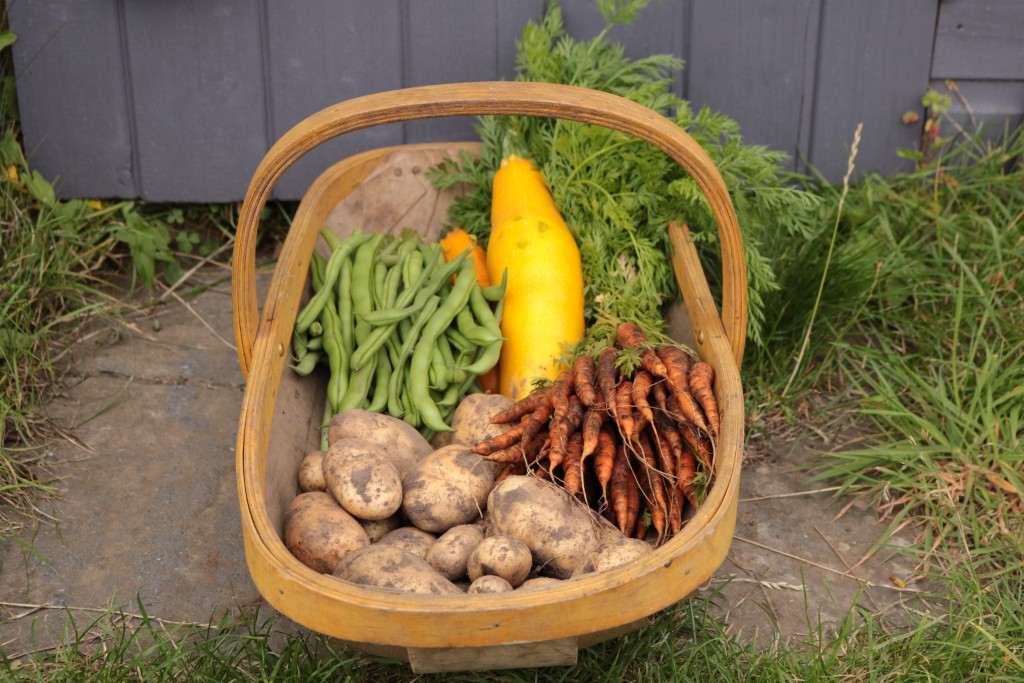 2 thoughts on “An Eventful Afternoon”