We’re already halfway through March and I’ve realised I haven’t shared my 2016 plans with you all yet and I am ever so sorry! I guess you could say it’s been a very hectic but amazing start to the year what with spending most of my time in Wales, in fact I’ve only been home for a whole 20 days this year… 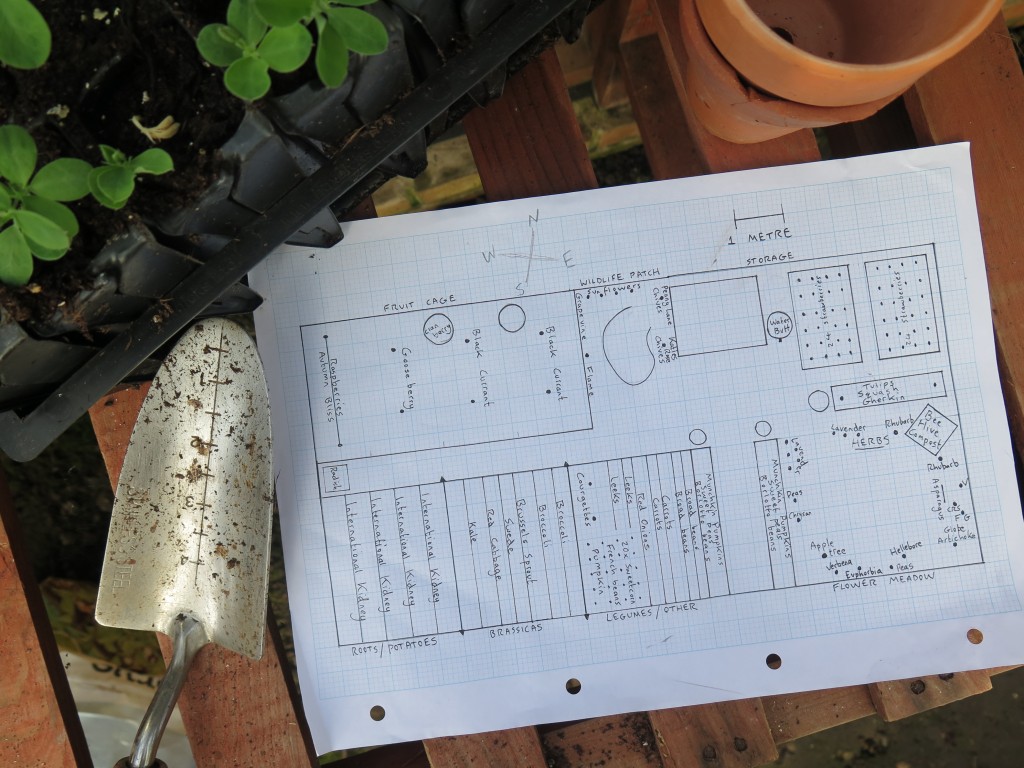 There’s lots of new vegetables, flowers and new varieties that I want to try growing this year as well as experimenting with a few different techniques. One of the things I am excited about trying is the three sister technique, french beans climbing up sweetcorn with pumpkins growing on the ground around them, all working in perfect harmony and taking up less space. My plot measures 13 metres by 7 metres so I need all the space I can get! Some of the new vegetables I will be growing this year are courgettes, onions, swede, purple sprouting broccoli, radish, peas, sweetcorn and squash. Plus there’s plenty of new flowers on my list to help fill up my new flower patch!

The fruit cage has been built and is near enough finished so I’m hoping for the first ever harvest from my black currents and gooseberries this year, something I am very excited about! All it needs now is a door and the bark chip flooring needs to be secured behind a plank of wood so the raspberry canes can grow without being smothered.

I’ve also carefully planned out the second growing season on plot 15c, trying to make the most out of lack of space on the allotment by replacing early harvests with new crops to pick throughout Autumn and Winter. The early variety of potatoes will be harvested around May making room for leeks and swiss chard. The broad beans will make way for dwarf french beans, I’ll be able to fit in another crop of carrots and the swede and red cabbage will be harvested and replaced by turnips. That’s the plan anyway, of course it all depends on the weather and I’m hoping for a long Summer this year. 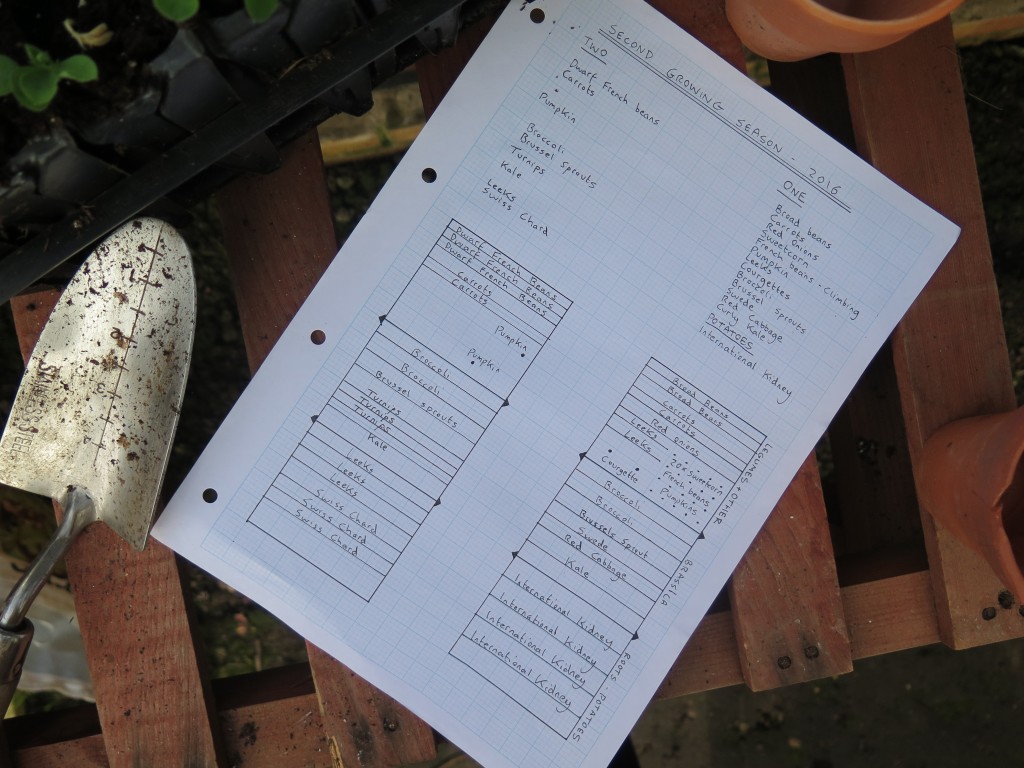 Now onto the new flower patch and the area which I am most excited about… It’s going to be a rather random but carefully though out layout consisting of annual and perennial flowers working alongside edible vegetables including sweetcorn, peas, swiss chard, asparagus, globe artichoke and rhubarb. Not forgetting a small area by the trough that will be home to the herbs, some in pots and some planted into the ground with a dwarf lavender hedge creating an entrance to the flower patch. There will be various structures here too with a large handmade compost bin that looks like a bee hive as well as a bird bath, hedgehog house, bug hotel and some obelisks too. I want this area to pretty much look like a very tiny cottage garden… that’s what I see in my head anyway! 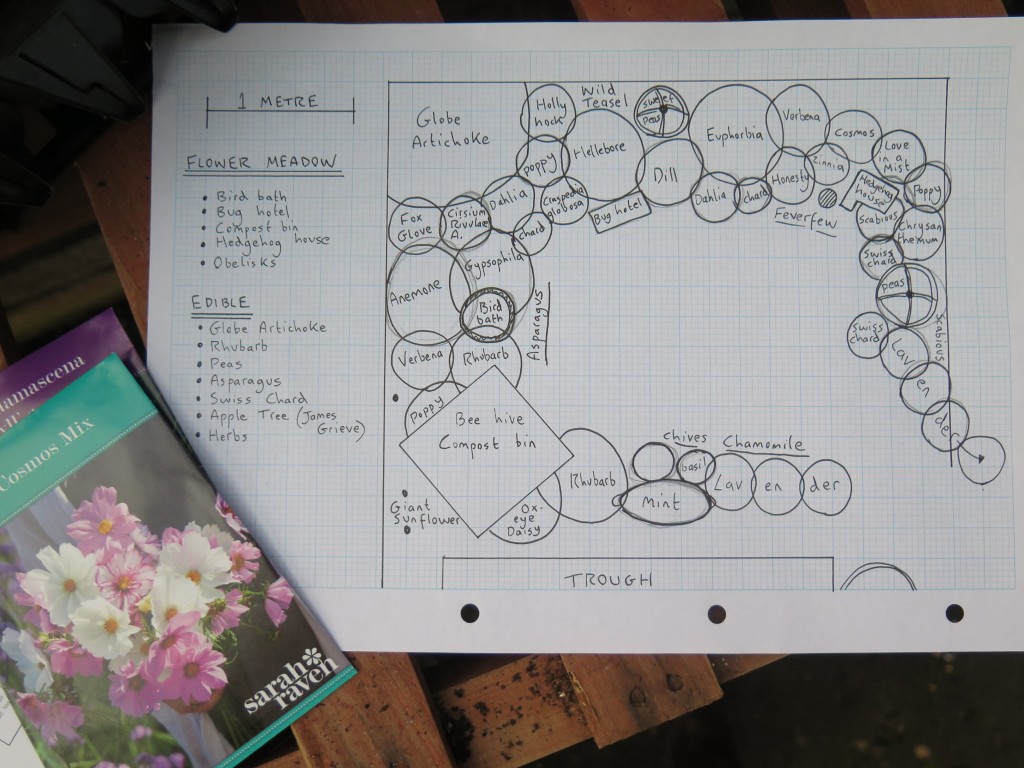 Last but not least the Wildlife Pond area will be as natural and rustic as possible with annual flowers such as cosmos, poppies and scabious surrounding the water. I wasn’t entirely happy with this area last year and my choice of flowers didn’t work right at all so I’m resorting back to the good old varieties I had the first year. This patch will be left alone for the wildlife and them alone, food for the butterflies and bees and hiding places for the frogs. Inside the pond is a water iris and a water forget me not as well as some oxygenating plants, the frogs love it when the calendula spreads over the waters edge so I’ll be growing lots of this around the pond like usual. The 4 giant sunflowers will line up against the back of this area again and this time I’m trying a new variety called ‘Mongolian Giant’ so fingers crossed for some very tall sunflowers! Then there’s not forgetting the grapevine that is secured to the side of the fruitcage, it’s been pruned and is ready for the year ahead although it will be a good few years until it produces any grapes for eating. 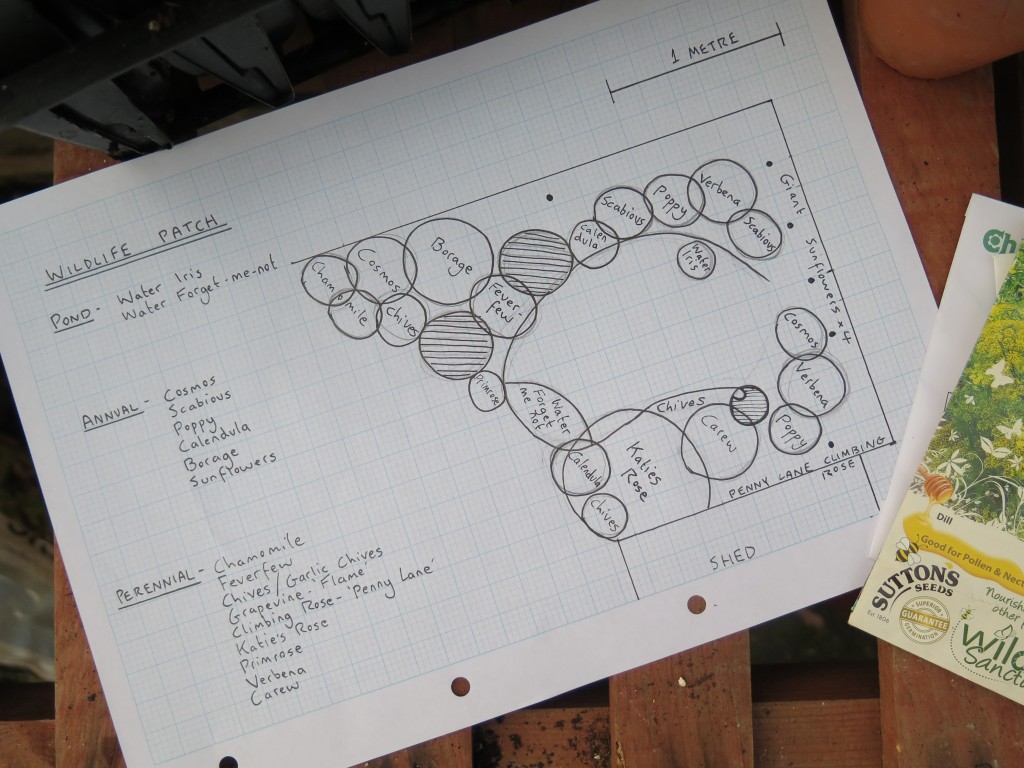