It’s one of my most favourite times of the year, the time when you can dream and put all your ideas down onto paper. A time when it’s grey and miserable outside but in your head it’s full of all the pretty flowers and delicious vegetables that you’ll be growing this year… I just can’t wait!

It’s February and the plans for plot 15c have finally been completed! I’ve been busy planning since before Christmas, drawing out my designs and flicking through seed catalogues for inspiration, making lists of what I want to grow and what I need to build as well as sorting through my old seed packets to see what I already have. There’s going to be a big change on the plot and I’m so excited to tell you all about it, but I’ll talk more about that below! 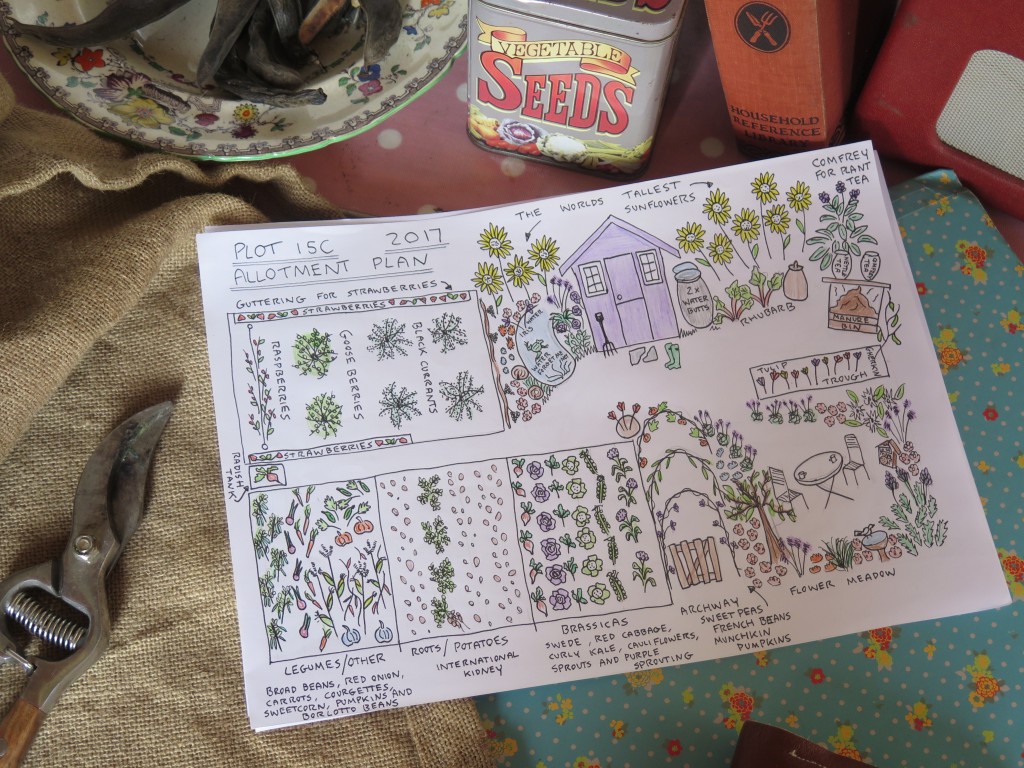 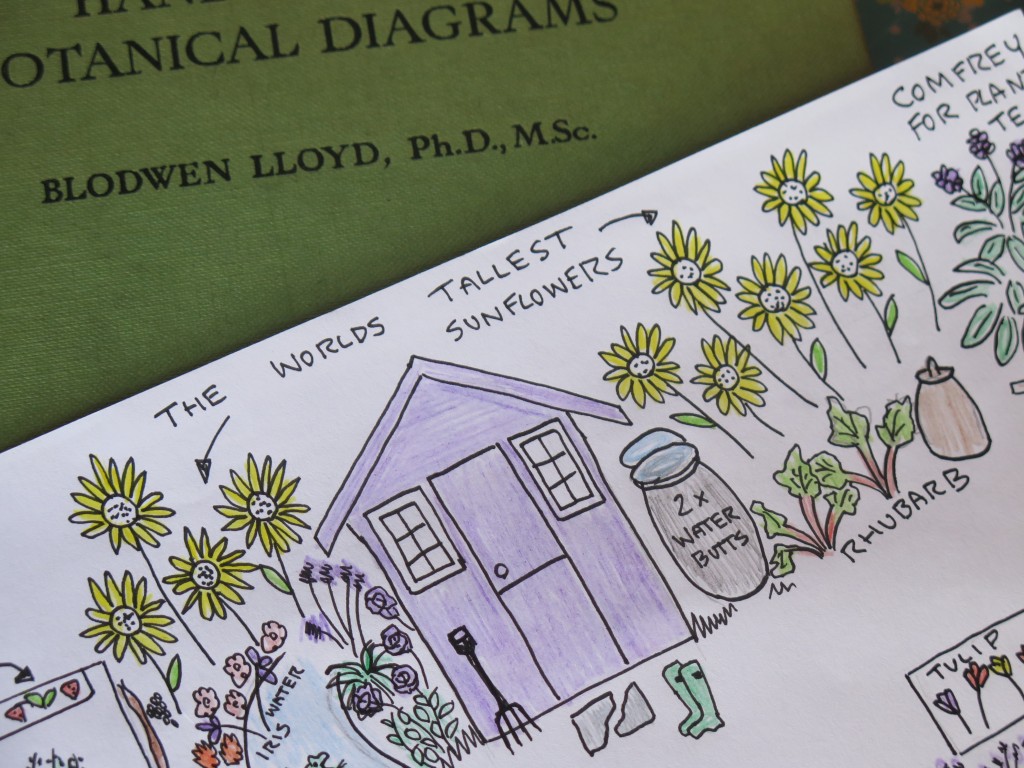 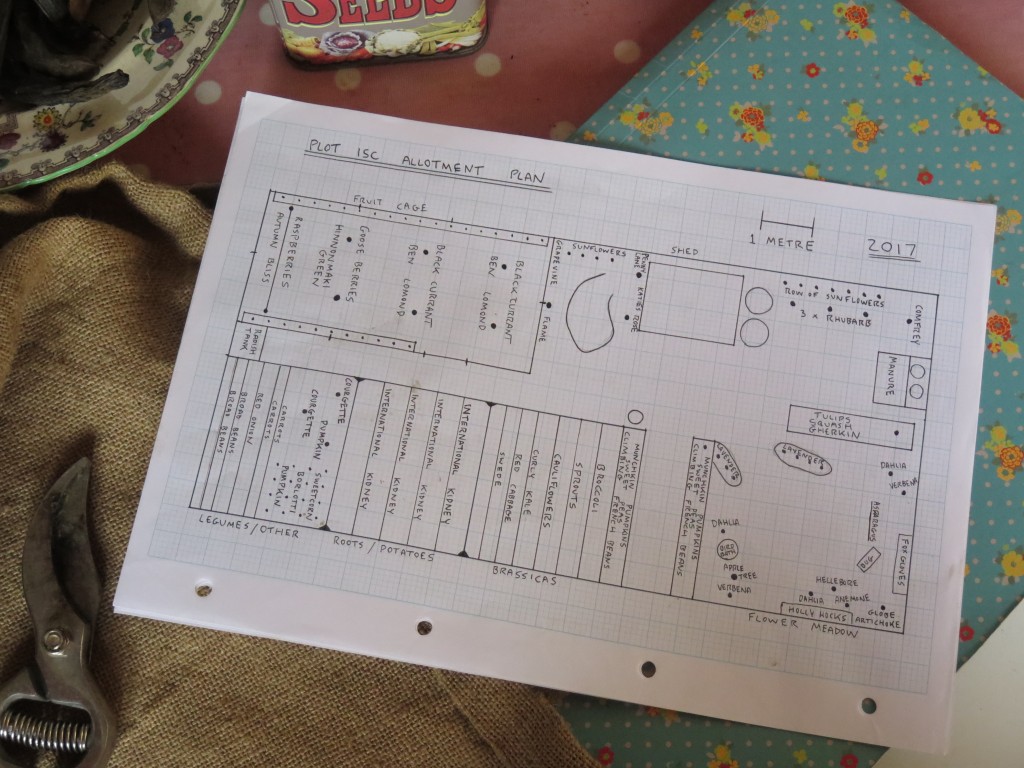 I’ll be growing much of the same crops as last year with a few small adjustments and variety changes. Although over the past few years I have grown specific plants that work well for me so there isn’t much that is changing! I’m also sticking to the phrase ‘grow what you like to eat’, even if it is a little boring and plain you can’t beat staple crops like potatoes, beans, cabbages etc. Of course it’s fun to grow new things and I’ll be attempting to grow a few different crops this year like swedes and cauliflowers and some purple radishes to match my shed! I’ll also be building a new archway because I’ve missed it so much, this time I’ll be asking my Dad to make one out of metal so that it lasts longer. The munchkin pumpkins and sweet peas will be growing up it this year but I’ve made a change on the bean front. My attempt at the three sisters was a bit of a disaster last year but I’ve learnt from it and changing certain things to make it work better. I’ll be sowing the pumpkin earlier than last year to give it a head start and also swapping the beans for borlotto beans, that way I won’t have to pick the beans as often as the french beans because I’ll be leaving them to dry on the plants. Therefore the climbing french beans will replace the borlotto beans that grew on the archway, simply as that! 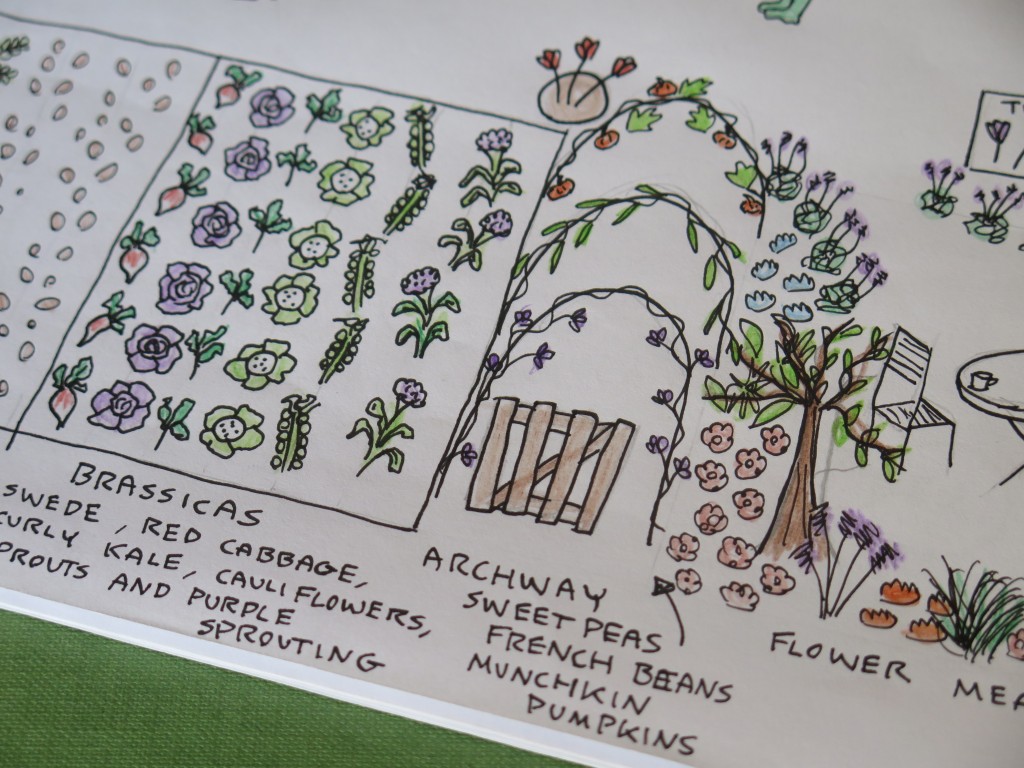 The overall plan hasn’t changed much over the past 4 years either, there’s still the 5 main areas: the three year rotational vegetable beds, the fruit cage, the wildlife area, the flower patch and the area next to the shed which used to house the strawberries… This is the only area to change and will now be called the functional area! As you all know I’ve had trouble with the bindweed here in the past and the weeds grow like crazy in the raised beds, in fact they are hard to keep on top off! Each raised bed has a mesh bottom making it impossible to dig the roots up so therefore I have made the decision to remove the beds completely. The plans for this area include a row of sunflowers along the back of the fence and 3 rhubarb plants infront of them (I’ll be using a rhubarb forcer here too) There will also be a grass lawn leading up to a manure bin next to the trough with a small shelf above to house two tubs of homemade nettle and comfrey fertilisers that I plan on making this year. I’ll be growing my own comfrey in the far corner so I can make my own plant tea from the leaves. The whole point of this area was to have something that I can give back to the allotment, something I have been lacking in the past few years. I want to help boost the nutrients in the soil to help get a better crop and what better way to do that then to add well rotted, free manure and to make your own organic fertilisers?

The strawberries will instead be moved to the fruit cage where they will be planted in guttering around the top edge of the cage. Ever since making the raised beds I’ve regretted not planting the strawberries vertically to save much needed space on my tiny allotment. They’ll be safe from the rats and the birds in the fruit cage and it will free up that space for the sunflowers, rhubarb crowns, homemade fertilisers and the manure bin. 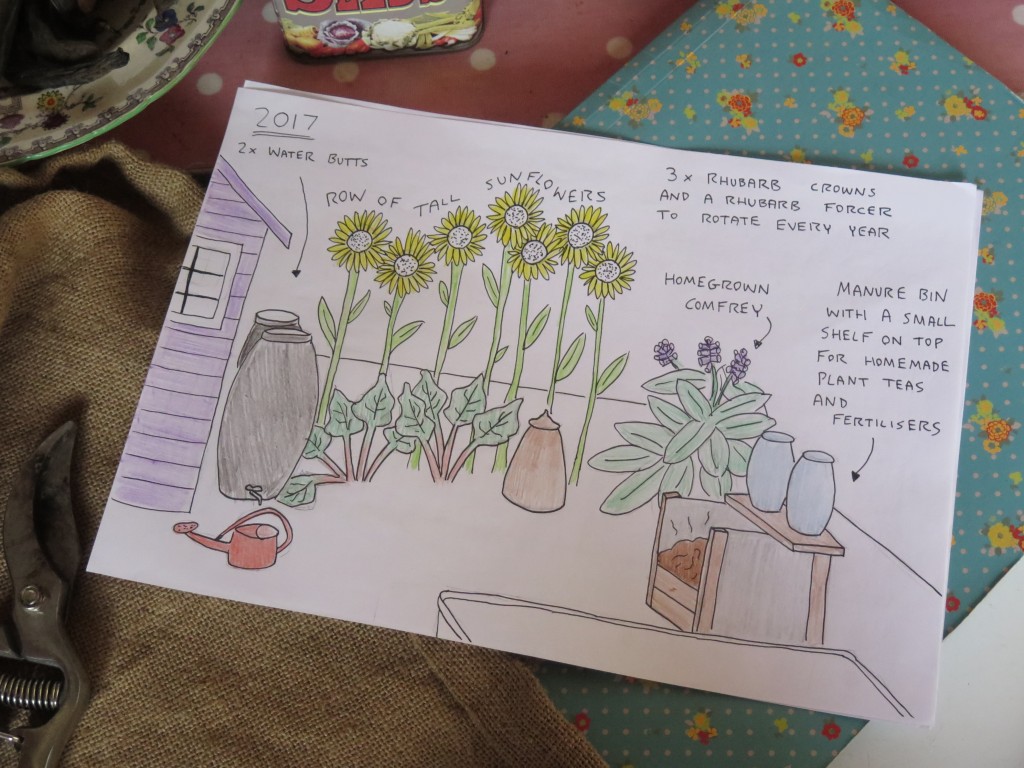 I’ve also planned ahead for the second growing season, something I do every year to make use of the limited space that I have and it usually turns out perfect. The early sowing of broad beans will make way for a late sowing of dwarf french beans and another two rows of carrots will be sown straight after harvesting the first lot. Once all the early salad potatoes have been harvested by July I’ll plant out some leeks, kohl rabi and turnips. All of which will be sown in the Summer so that they have a head start before being planted out. I’m also tempted to sow some late green manure in the empty space that the sweetcorn, pumpkins and courgettes leave but I’ll have to read up on it first. 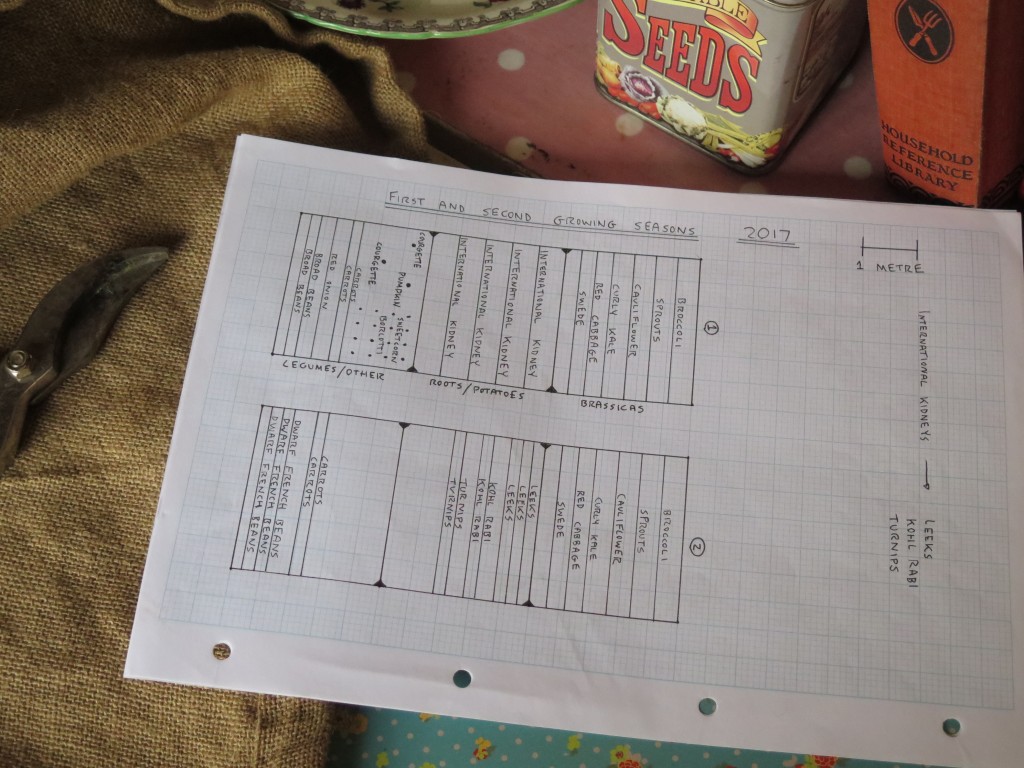 Now onto the wildlife area where the main focus is the pond, one of my favourite areas on the allotment. The pond has been one of the best things I’ve created on plot 15c and the frogs are not only a joy to watch but have kept the slug issue to a minimum last year. I’m hoping for lots of frogspawn so I can watch the wildlife and put the little frogs to work! Now the flowers around the pond will be left untouched for the birds, bees and as shelter for the frogs. There’s a climbing rose, a rose shrub and an evergreen grass next to the shed that provides the perfect atmosphere for the wildlife as well as a little frog house for them to hide in (I actually found one sitting in there last year and I was so happy!) The rest of the flowers will be mostly annual and will include a few of my favourites. Cosmos, scabious, poppies, borage, dill, sunflowers and calendula to name a few. There’s also the grapevine growing up the side of the fruit cage and two pond plants, a water forget me not and a water iris which both bloom beautifully and provide for the frogs too. 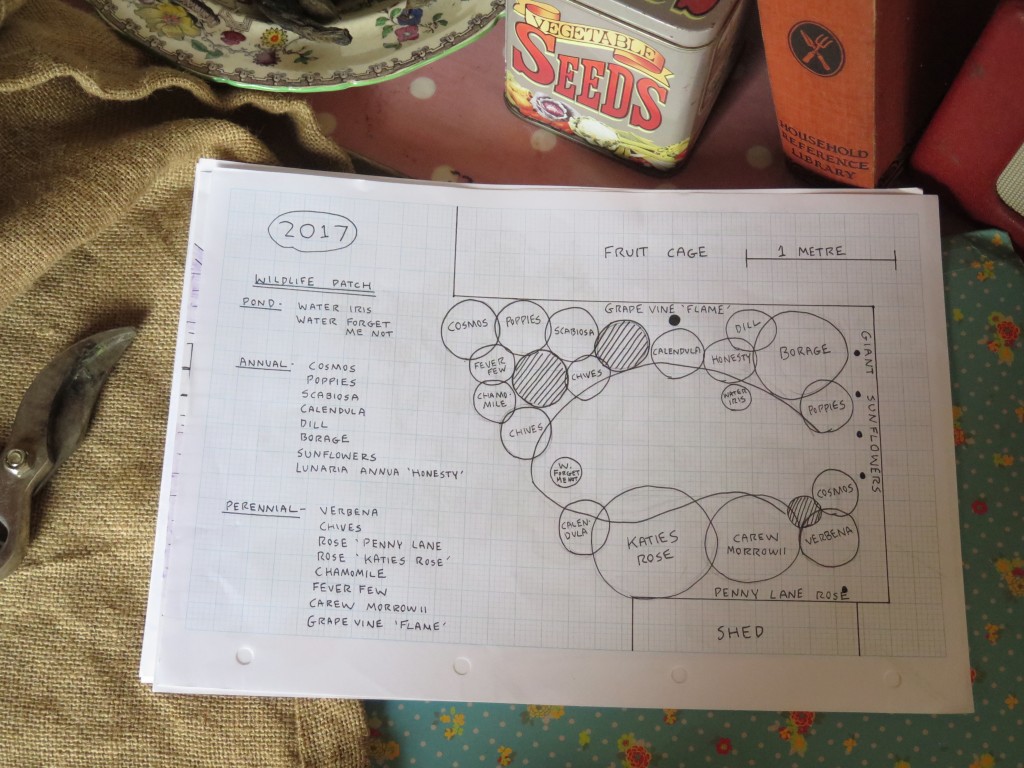 The flower meadow will be an area not only for the bees and wildlife but for me as well, a place to sit and unwind and pick the odd flower to take home. They’ll be a mixture of annual, biennial and perennial plants growing here as well as a few edible plants like the apple tree, a globe artichoke, asparagus and some swiss chard. There will be a short lavender hedge leading into the flower meadow with a short lawn where I can set up a table and chairs to enjoy the fruits of my labour. Taller flowers such as the globe artichoke, verbena bonariensis, cirsium rivvlare atropurpureum, fox gloves, holly hocks and some tall sunflowers will line up along the back against the fence. Then there will be three different varieties of dahlias, cosmos, zinnia, scabious, feverfew, dill, chamomile, euphorbia, ammi majus, poppies, craspedia globosa, panicum elegans ‘frosted explosion’, gypsophila and alliums creating a very cottage garden border around the edge. 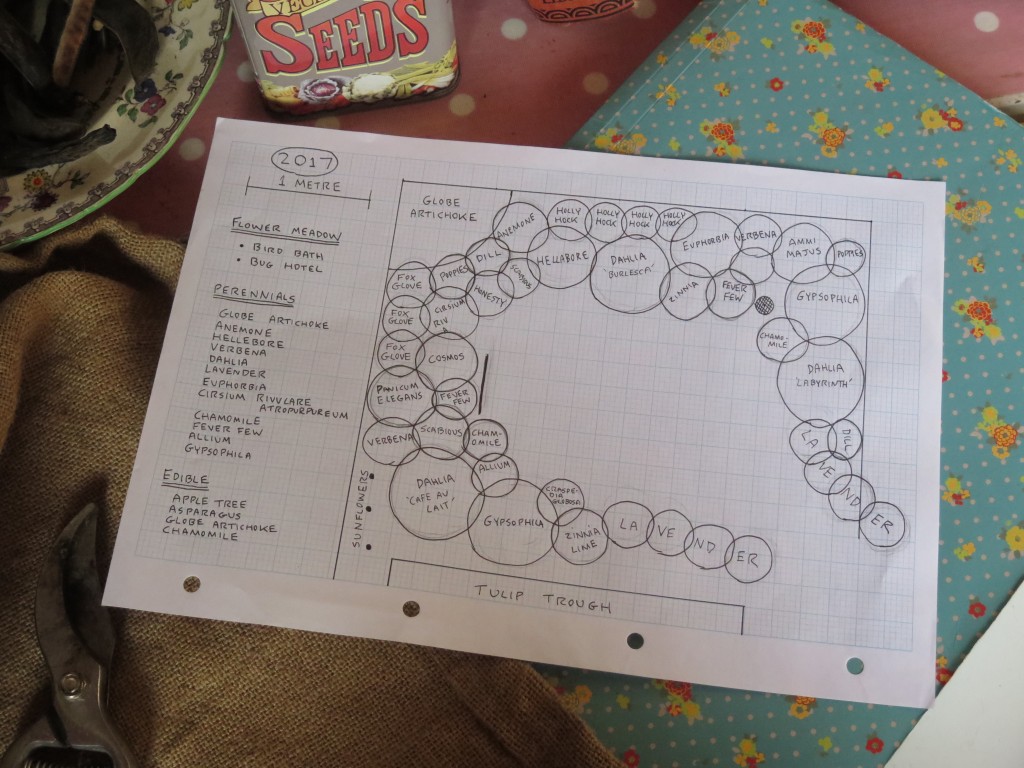 And that’s the plan for 2017! Obviously this is just a guideline, plans don’t always go smoothly and certain things might change. It all comes down to the weather and time, something that we can’t entirely predict and something that I will be lacking of this year. We are planning double the amount of garden shows to sell at in 2017 and time will be limited but I’m excited and eager to try and get this plan to reach it’s full potential. I cannot wait to get out in the greenhouse and get my hands dirty!

Here’s a detailed list of all the seeds and plants that will be growing on plot 15c this year: